Because the Ascent and Marathon are so unique and so physically demanding when compared to other half-marathons or marathons, having a general understanding of the courses is the key to planning your training. 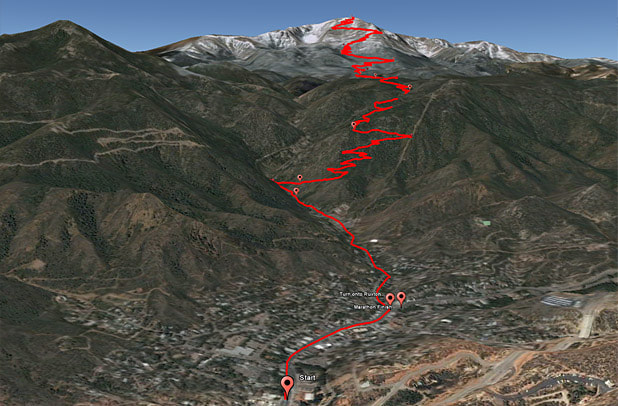 You can view the course in 3D if you have Google Earth.

The races begin in front of the City Hall in Manitou Springs, a city of some 5,000 population, located approximately 6 miles west of Colorado Springs, Colorado. While both races begin in the city (and the Marathon finishes in the city) the majority of both races are run on Barr Trail in Pike National Forest. Barr Trail is a US Forest Service trail that is on the east face of Pikes Peak. The race courses do not use any part of the famed Pikes Peak Highway (which is on the north and west flanks of the mountain). The trail is often narrow, winding, and may be gravel, rocks or dirt with sharp turns and abrupt changes in elevation or direction. However, there are no exposed ledges, so there is little danger of falling off the trail!

From the Manitou Springs City Hall, the races proceed west on Manitou Avenue for 0.42 miles to Ruxton Avenue. At Ruxton, the course turns west for 0.8 mile to (and past) the Cog Railway Depot to Hydro Street. At this point there has been an elevation gain of approximately 300' for an average grade of 4.5%. At .23 of a mile past Hydro Street, or 1.45 miles total, the asphalt ends, and the course continues on a dirt/gravel road which parallels Ruxton Creek. At the end of the dirt/gravel road, there is a fenced area, and the course stays to the north side of the fence before meeting up with a small trail on the right. This trail, commonly referred to as the “spur trail,” connects to Barr Trail in .1 of a mile. From this point to the summit at 14,115,' the course follows Barr Trail. The width of the trail will vary as will the grade (steepness) and surface (footing).

The footing, or surface, of the trail does vary. In the forested sections, it is primarily decomposed rock with a mixture of dirt and loose gravel on the surface with the occasional root or rock protrusion. Above treeline (that is, above the A-frame shelter) the trail is primarily loose gravel with one short section of broken rock (generally referred to as rubble), and the section known as the 16 Golden Stairs being gravel with frequent step-ups of some 10 to 15 inches (the Golden Stairs refers to the 32 switchbacks remaining to the summit). In general, the condition of Barr Trail is excellent thanks primarily to the Friends of the Peak and the Pikes Peak Trail Dogs led by Gail Allen.

The course for the 26.21 mile Pikes Peak Marathon® covers the same route as the 13.32 mile Pikes Peak Ascent® race but returns down the trail from the summit and finishes at Ruxton and Manitou Avenues in Manitou Springs.
​

Much of the trail is narrow, so passing is difficult or impossible. Experienced runners will advise you not to pass frequently as the result is, in most cases, that you will expend too much energy and then slow down (only to be passed by those you may have just passed). On some sections of the trail, your best bet if you get caught in traffic is just to relax and wait for a wider portion of trail! This is particularly true once you leave the road and until you almost get to No Name Creek. There is plenty of time, and room for passing above No Name Creek — A least until you get to Barr Camp.

Finally, many employ a strategy of going out fast on the road to get ahead of the traffic. However, the problem with that strategy is that everyone knows it, so those that try this often just blow their race and become the very people they were trying to get ahead of. You have to find a balance between not giving up places and not blowing your race!
​

In a word, UNPREDICTABLE. Pikes Peak can create unusual and rapid weather changes above treeline. The temperatures may vary as much as 50° F (23° C) between Manitou Springs and the upper parts of the mountain. Those who ran in recent years can attest that it can be downright nasty — particularly above treeline. In 2004, we had 6-8" of new snow on the Peak on Ascent morning. In 2005, hundreds of runners were stranded on the summit when a huge storm hit the mountain! Every day on Pikes Peak can bring rapid, frequent and extreme weather changes. BE PREPARED!!

Some weather specifics: Mean temperature at the start line at 7am is usually 60° - 70° F (15 - 21° C) and at the summit 35-55° F (2-12° C) by 10am, not counting wind chill factors. Late afternoon temperatures in Manitou Springs in August can reach the 90°s F, while above treeline storm cells can drop ambient temperatures into the 30°s F. Humidity normally is <15% (usually much less at higher elevations).

The vagaries of the weather on the upper portion of Pikes Peak cannot be overemphasized. Chilling rain, snow and sleet showers, high winds and dramatic temperature changes frequently occur in August.
​

Lightning deserves its own heading separate from weather because it can come out of the blue! Indeed, the possibility of lightning poses the single greatest threat to runners, especially above treeline. Mother Nature is very unpredictable regarding this element! If you are caught in severe lightning, it is best for a group to spread out and crouch down with your feet planted on anything that will insulate you from the ground (jacket, fanny pack, etc.). Try not to be the tallest object in the vicinity!

We have, and probably will again, turned people back down the mountain at the A-Frame due to the threat of lightning higher up. Search and Rescue receives up-to-the-minute weather data. Please follow any directions they give you.

Click here for a photo of what happens to your shoes when you are close to a lightning strike while running.
​

Locations and distance from start:
At the Spur trail and the Incline overlook, we will provide water and Gatorade. There will be water, Gatorade, energy bars, fruit, cookies, and pretzels at No Name Creek, Bobs Road, Barr Camp, A-Frame, Cirque, and the finish of each race. Should you need special nourishment, carry what you might need. Runners are encouraged to take in as much fluid as possible, not only water, but electrolyte replacement drinks. Recent data has shown that some competitors may become extremely ill, not just from dehydration, but from low sodium caused by electrolytes being washed out of the system. Drink your Gatorade!

With but one really poor fire road going anywhere near Barr Trail, just HOW is all that drinking water provided at the aid stations?​

As part of the race permits with the US Forest Service, we must ensure that all litter is removed from the course. It is very difficult to retrieve cups, wrappers, and packaging (mainly the tops) from energy gels, especially when they’ve been tossed off the trail. Therefore, at each station a trash zone will be clearly indicated. Throwing trash on or off the trail outside of these zones is not permitted!
​

Transportation Back to Manitou Springs

Ascent runners will be transported from the summit back down to Manitou Springs. Every effort is made to transport runners off the summit as quickly as possible. However, because YOU MAY EXPERIENCE SHORT DELAYS getting a shuttle off the mountain after the race, it is recommended that you use sweat check to have some warm gear at the summit. Please do NOT linger on the summit, not only because of adverse physical effects but also to expedite getting all runners off the summit.

The summit shuttle busses stop at Glen Cove where runners are transferred to larger busses that return to Memorial Park.

Be at the start at 600 Manitou Avenue to see the runners off. The finish of the Pikes Peak Marathon is on Manitou Avenue at the intersection of Ruxton Avenue and next to Soda Springs Park. We ask that all spectators respect the police and follow their instructions regarding crowd control.

To view the finish of the Pikes Peak Ascent or the turnaround for the Marathon, take the Pikes Peak Highway (a toll road) or ride the Cog Railway. The race organization does not provide transportation for spectators from Manitou Springs to the summit.